Bipartisan infrastructure bill: Where do we go from here?

Although the recent Senate passage of a bipartisan infrastructure bill was an important, and crucial, step toward the rebuilding of America’s infrastructure, it is very far from a done deal. A number of critical steps still need to happen before infrastructure funding begins to flow to government entities, businesses, and other infrastructure plan stakeholders.

The $1 trillion bill – which includes about $550 billion in new federal spending, in addition to renewing existing programs – has now moved to the House of Representatives, where it’s not clear if any changes will be made to that bipartisan effort. Separately, plans are also advancing for a $3.5 trillion budget bill, whose passage had until this week been linked by various negotiations to the passage of the infrastructure bill. Current proposals for the budget include measures to address a broader slate of policy issues, including climate change and economic inequality, along with a number of potential tax law changes being proposed to help offset infrastructure and related spending and increase taxpayer equity. Both unfolding pieces of legislation represent significant opportunity – and risk – for our clients in the years ahead. Given the broad and far-reaching scope of these developing bills, the language will demand significant scrutiny from members of both parties and from industry.

Given the number of practical and political issues involved, we believe that any approval of either piece of legislation is far from assured in their current form. Most important, we believe that any spending approval is unlikely before the very end of the year, despite otherwise operative legislative budget deadlines. Fortunately, this delay should give government entities, private companies, investors, taxpayers, and other stakeholders ample opportunity to explore key areas of the bills and consider how they may impact their businesses and operations. As the draft texts of such legislation become known, a flurry of lobbying is expected to further alter the final versions.

The timeline for this process is likely to measure in months, and could be impacted by a host of unforeseen factors, including purely political ones. Here is an overview of what’s happened so far and roughly how we see the rest playing out, based on what we’ve been hearing and reading out of Washington. Plus, don't miss our timeline infographic at the end of this article. (Note that dates are subject to change.) 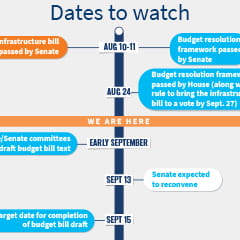 Nonetheless, much remains uncertain, such as the passage of parts of the $3.5 trillion budget plans that contain aggressive climate change policies or antipoverty measures. Some are saying that the more controversial measures, such as climate change legislation, might be postponed until later in 2022 or beyond, but before President Biden goes up for re-election. The impending 2022 midterm elections could play a role here in any number of ways. For example, Democratic politicians up for reelection at that time may insist that certain proposals be removed from the overall legislation to better appeal to their constituents, given the narrow majorities in the House and the Senate. Or, there could be eagerness to advance certain provisions before the midterms due to fears the elections could bring a change to either chamber’s majority.

Lastly, any unanticipated delays of the infrastructure or budget bills in 2021 may also impact the passage of an annual tax extenders package, which remains yet another open question.

Please do not hesitate to reach out to discuss how we can be of assistance as these bills make their way through Congress. 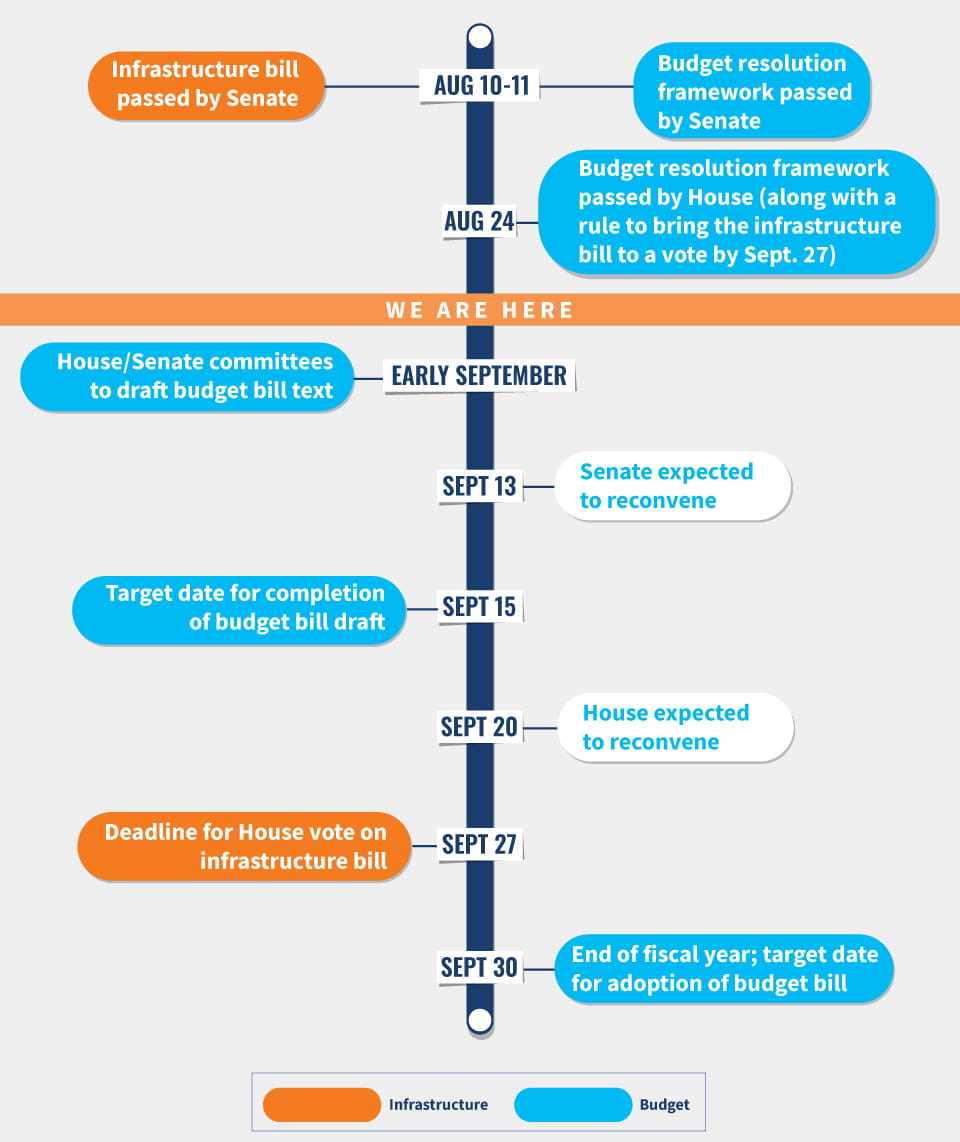 Dates subject to change; based on news reports and federal materials