What do federal tax proposals mean for solar valuations?

Many questions have been circulating related to the various tax proposals introduced this year and their potential impact on solar project valuations. In this article, we discuss important aspects that could impact planning for your solar project. (Note that details are subject to change as final legislation takes shape; stay tuned for more information and insights. Make sure you’re subscribed to receive our email updates.)

What facet of these tax proposals is expected to impact my solar project valuations?

An important aspect appears to be the contemplated changes to the corporate tax rate. Here we will consider three new rates proposed as of the date of this writing, as part of the American Jobs Plan, the draft Build Back Better reconciliation bill, and a proposal by Sen. Joe Manchin (D-West Virginia).

How much of an impact would a new corporate tax rate have on solar project valuations?

CohnReznick performed a sensitivity study on the potential impacts of a new corporate tax rate. We have determined that if all else holds equal, the overall value may not change much, but the composition of what makes up the value would shift a bit. Contracted and merchant period cash flow would be less valuable, as they would be taxed at a higher rate. However, tax benefits from depreciation would be more valuable. This trend is more pronounced under the bonus assumption (as compared to modified accelerated cost recovery system, or MACRS) due to time value of money, where the hypothetical market buyer could be expected to monetize the tax benefits from bonus depreciation. 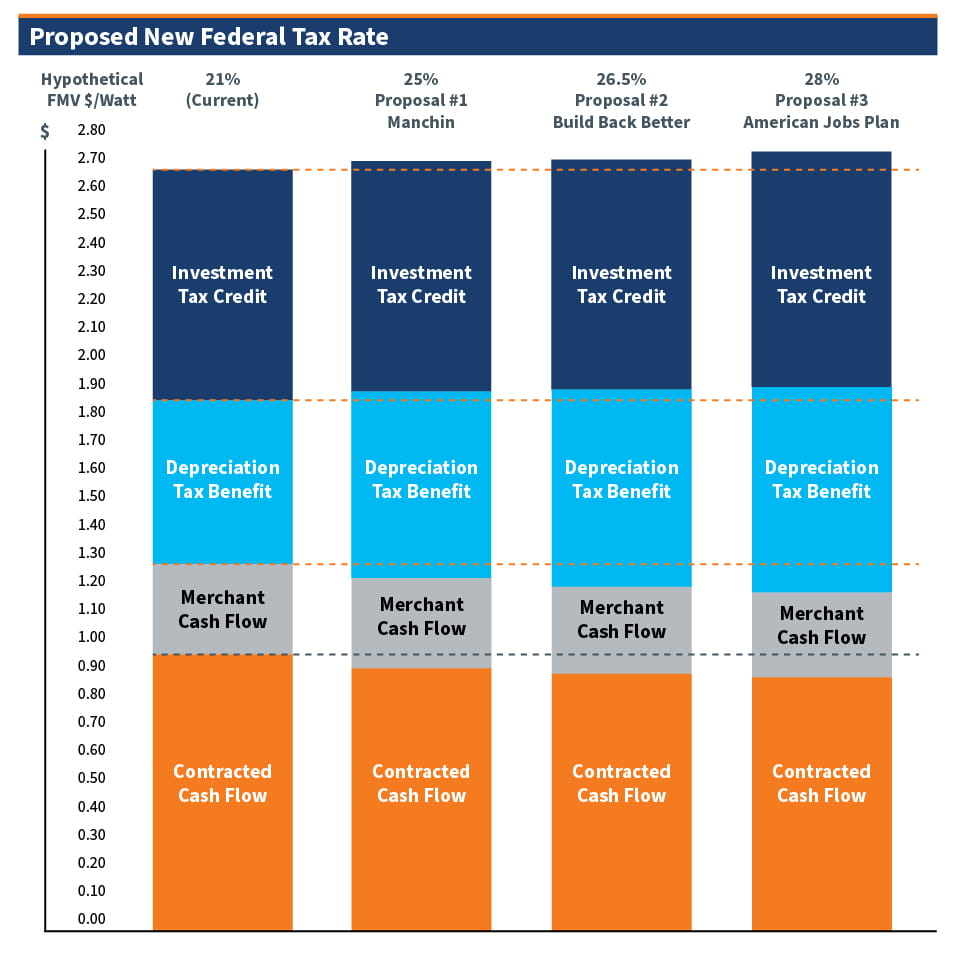 Based on our sensitivity case above, the total expected FMV increased from the current base case as follows:

What could be the impact to the estimated Cost of Capital?

If all else holds equal, the effects on calculated weighted average cost of capital (WACC) discount rates using the capital asset pricing model (CAPM) from an increasing tax rate would be:

These factors both serve to reduce the WACC as calculated per CAPM and thus would increase project valuations, all else held equal. These variables could have a range of impacts based on the determined appropriate capital structure for the subject asset.

When is a corporate tax rate change expected to go into effect?

Until a particular proposal actually becomes law, it’s not known when such proposal might become effective. However, the Department of the Treasury has stated that the American Jobs Plan’s increase of the highest marginal corporate income tax rate to 28% “would be effective for taxable years beginning after Dec. 31, 2021. For taxable years beginning after Jan. 1, 2021, and before Jan. 1, 2022, the tax rate would be equal to 21% plus 7% times the portion of the taxable year that occurs in 2022.” The Build Back Better plan (in its current form) would also apply the change to taxable years beginning after Dec. 31, 2021. However, exact dates are contingent on legislative decisions not yet made. Valuations will typically make assumptions based on what is “known or knowable” as of the Valuation Date. So, we would expect valuations to start incorporating the new tax rate on the date it becomes effective, or as of a date where the valuation professional is fairly certain on the new rate going into effect.

What should solar companies be doing now in order to prepare for these potential changes?

Solar professionals should consider consulting with experienced tax specialists and financial advisors on how their tax position and expected future deal structures could change. Solar professionals should keep an eye on the proposed change in rates and should analyze the expected impact to value of their development deals and investment utilizing their specific facts and circumstance of their projects across a range of rate changes.

Should I expect the Solar Investment Tax Credit (ITC) to be impacted?

While it remains uncertain, an issue brief published by Department of Energy in August 2021 stated the expected expiration of the ITC and suggested that extensions of these tax credits would result in a greater number of new solar projects. The Department of Energy further suggested and identified that an extension of the ITC would be an effective tool to help meet the President’s goal for clean energy deployment. In September 2021, as part of the reconciliation bill development process, the U.S. House of Representatives proposed extending the Solar ITC for 10 years at 30%. The proposal further suggests an additional 10% bonus credit for projects meeting certain domestic content requirements.

Since many structures allow for the Solar ITC to be claimed on fair market value, the expected ITC amounts could fluctuate with the changes in valuation described above.