Business Combinations (Topic 805) – Clarifying the Definition of a Business (as updated by Accounting Standards Update 2017-01) provides guidance to assist entities with evaluating when an integrated set of transferred assets and activities (referred to as a “set”) meets the definition of a business. Transactions where the set does not meet the definition of a business are accounted for as asset acquisitions. Determining whether a set constitutes a business under Topic 805 is critical because the accounting for a business combination differs significantly from that for an asset acquisition. The below is a listing of those accounting differences: 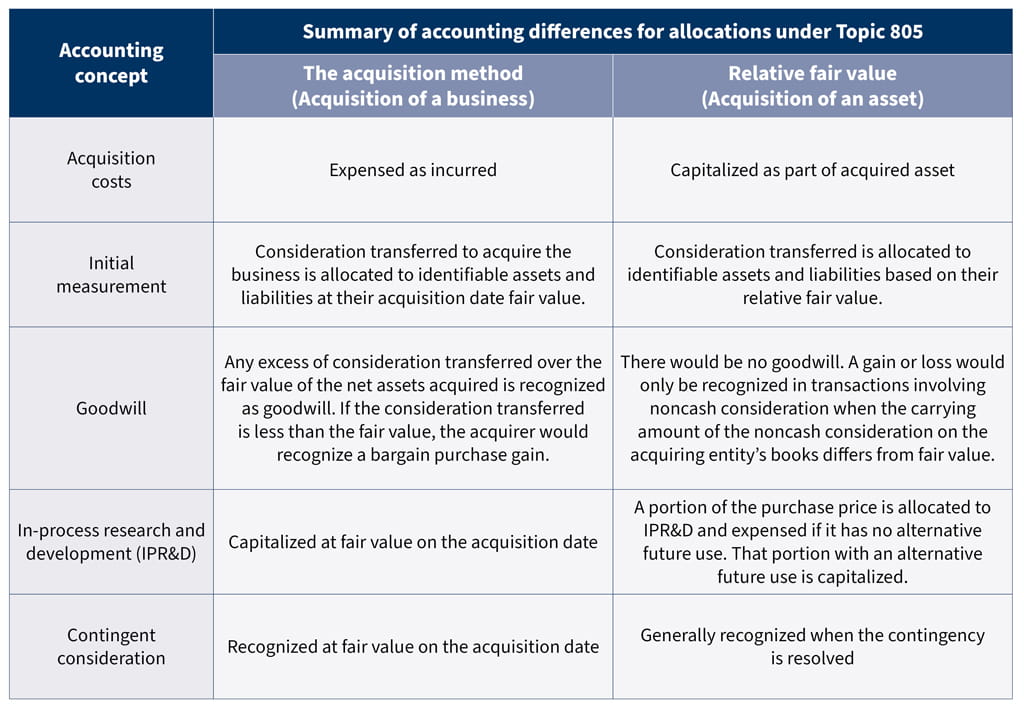 Definition of a business

Under Topic 805 as updated by ASU 2017-01, a business is an integrated set of activities and assets that must consist of, at a minimum, a) an input and b) a substantive process that when applied to the input significantly contributes to the ability of the set to create outputs.

This definition contrasts with the previous definition, as there were no specified minimum inputs or processes in order for a set to meet the definition of a business if a market participant was capable of continuing to produce outputs (i.e., by integrating the acquired business into its own inputs and processes). The ASU also narrowed ASC 805’s definition of outputs from “…a return in the form of dividends, lower costs, or other economic benefits…” to “…goods or services to customers, investment income (such as dividends or interest), or other revenues.”

Application of the screen (“Single or Similar Asset Threshold”)

Before determining whether the acquisition of a set meets the definition of a business, reporting entities are first required to apply a screen. If the transaction meets the criteria in the screen, the set will be accounted for as an asset acquisition. The screen simply states that a set would not be considered to be a business when there is a concentration of substantially all of the fair value of the gross assets in either of the following:

1. An individual asset or a group of assets that could be recognized and measured as a single identifiable asset, described in ASC 805-10 as:

b. “In-place lease intangibles, including favorable and unfavorable intangible assets or liabilities, and the related leased assets.”

2. A group of similar identifiable assets. Topic 805 provides asset groups that specifically should not be considered similar (such as tangible and intangible assets).

If a transaction does not meet the screen, the reporting entity would need to determine whether the set has, at a minimum, an input and a substantive process that when applied to the input significantly contributes to the ability of the set to create outputs.

The following are summaries of two examples from Topic 805 to illustrate the screen test; see Topic 805 for more.

The acquisition of real estate

ABC’s operations consist of acquiring, renovating, leasing, selling, and managing real estate properties. ABC acquires a portfolio of 10 single-family homes. Each home has 1) an in-place lease and consists of 2) land, 3) building, and 4) improvements.

ABC did not acquire any employees or other assets in the transaction. The objective of applying the screen is to determine whether the fair value of the gross assets acquired is concentrated in a single identified asset or group of similar assets. For purposes of applying the screen, ABC must identify the assets acquired. Therefore, ABC determines that the homes represent 10 single identified assets because:

b. The in-place lease for each home is an intangible asset that, for purposes of applying the screen under ASC 805, should be combined with the related real estate considered a single asset.

In addition to the 10 single-family homes, ABC also acquires six 10-story office buildings that are fully occupied and have significant fair value. The six office buildings have contracts with vendors for cleaning services, maintenance, and security. ABC does not acquire any employees involved in strategic management, tenant management, or leasing, and will use its internal resource to fulfill those roles. ABC does, however, acquire certain building employees, but intends to replace them and property management with its own internal resources.

a. ABC concludes the office buildings and single-family homes are not similar assets because the nature and risk characteristics of operating them are significantly different. The risks associated with the scale of operating an office building, as well as obtaining and managing those tenants, are significantly different from those associated with single-family homes.

b. ABC therefore concludes that substantially all of the fair value of the gross assets acquired is not concentrated in a single identifiable asset or group of similar identifiable assets, and the transaction has not met the screen. Accordingly, ABC must evaluate whether the set has, at a minimum, an input and a substantive process that together significantly contribute to the ability to create outputs under the framework in Topic 805. In determining how to apply the framework, ABC must first determine whether the set has outputs. Through in-place leases for the office buildings and single-family homes, the set has continuing revenues, and therefore it has outputs.

c. ABC must then assess whether it has acquired the following:

As none of the criteria were met, “ABC concludes that the set does not include both an input and substantive processes that together significantly contribute to the ability to create outputs and, therefore, is not considered a business,” Topic 805 states.

Click to continue to our final article in this series, in which we discuss certain private company alternatives to goodwill and business combinations.

And if you're finding this series helpful, be sure to subscribe now to have future articles, event invitations, and other relevant content sent straight to your inbox. (Be sure to select "Attest and Technical Accounting Updates" under "Topics I'm interested in.")

This has been prepared for information purposes and general guidance only and does not constitute legal or professional advice. You should not act upon the information contained in this publication without obtaining specific professional advice. No representation or warranty (express or implied) is made as to the accuracy or completeness of the information contained in this publication, and CohnReznick LLP, its partners, employees and agents accept no liability, and disclaim all responsibility, for the consequences of you or anyone else acting, or refraining to act, in reliance on the information contained in this publication or for any decision based on it.
Share
Email Linkedin Twitter Facebook
John H. Sipe
CPA, Partner - National Accounting
View full biography
Contact John
Business Combinations: Overview for Private Companies
Learn more
Mergers & Acquisitions
Explore insight collection
Receive content on timely insights and events relevant to your business.
Subscribe