On July 28, the Senate announced an agreement on a massive federal deal designed to rebuild and reinforce critical components of America’s infrastructure. While the $550 billion bipartisan deal is just a fraction of the over $2 trillion that President Biden had initially proposed, it nevertheless contains significant investment in key areas including transportation, utilities, pollution remediation, and broadband. Final language and details are still being discussed, and some changes are likely before the bill gets to the president’s desk.

Politics aside, this is a historic effort to improve resources intended to have a lasting impact across industries. Many investments are touted in a White House fact sheet as the largest in history. And there appears to be a true focus on equity and supporting underserved communities, from measures intended to boost the affordability of high-speed internet and accessibility of public transit to “a first-ever program to reconnect communities divided by transportation infrastructure.”

Below is a summary of the core components of the plan as it now stands, according to the White House fact sheet and Bloomberg:

Part of the delay in bringing the plan to the Senate was the negotiation of the offsets defining how it would be financed. The chart below  shows the current proposed sources of the needed funds. 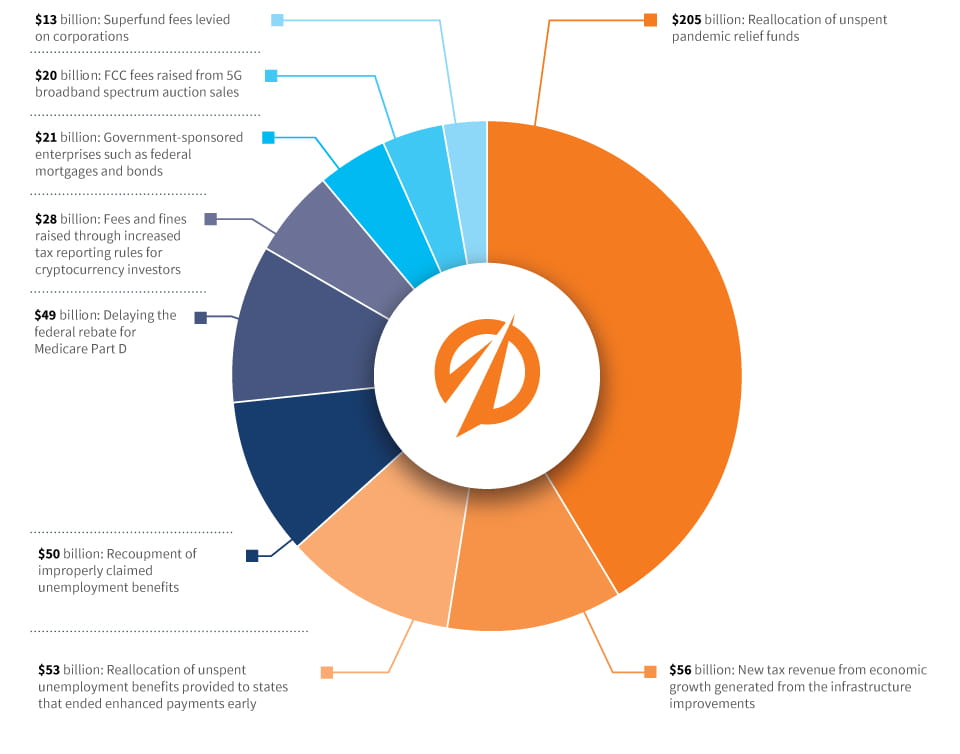 Where do we go from here?

It is important to note that while the Senate discussions and forthcoming bill represent a critical step in the process of modernizing our nation’s infrastructure, much remains to be done before this plan becomes law. The House of Representatives has its own to-do list and priorities, and may not choose to move on an infrastructure bill until the $3.5 billion reconciliation bill is approved. The resulting negotiations could take months, with 2022 budget approvals further complicating matters. While there is always a possibility that the legislation will take an unexpected turn, at this point, we’re not expecting President Biden to be signing an infrastructure bill into law until the November or December timeframe.

The CohnReznick Infrastructure Team will remain on top of the discussions and negotiations in Washington as this rapidly moving situation develops.

As always, feel free to reach out at any time to discuss potential risks and opportunities inherent in any legislative change of this magnitude.