Since the election, President Trump and Republican lawmakers have been calling for a comprehensive tax reform overhaul. There are two items in particular that are intended to be addressed: high tax rates and a worldwide (international) taxing regime. The United States currently has one of the highest tax rates than any developed country - and by a significant margin. Additionally, the United States imposes income tax on a worldwide system (albeit deferred), while most other countries impose a territorial tax system, only taxing earnings generated within their borders.

Over the past year, two tax reform proposals have been released—the House GOP Blueprint and President Trump’s tax proposal. In late July, the largest projected revenue raiser, a controversial change on imports/exports called the Border Adjustment Tax, was officially dropped from the House plan by the Ways and Means Committee. The “Big Six” group of Administration and congressional negotiators issued a statement on that issue:

“While we have debated the pro-growth benefits of border adjustability, we appreciate that there are many unknowns associated with it and have decided to set this policy aside in order to advance tax reform,” said the joint statement by House Speaker Paul Ryan (R-WI), Senate Majority Leader Mitch McConnell (R-KY),

On March 26, 2017, the White House released a one-page outline for its plans on tax reform as it continues to work with Congress and prepare an actual bill, a draft of which is expected shortly after Labor Day. The outline proposed by the White House followed the GOP Blueprint in many respects, but was very light on the details.

Republican tax negotiators believe they are closing in on an agreement to reform the U.S. tax code, but remain very much at odds over whether reform would be permanent or expire after a period of years. At this point, there are lots of discussions on how to tackle tax reform given the overall issue of revenue neutrality, given U.S. deficit constraints. We will provide a more updated report as that unfolds, until then this is our analysis of the prior two tax proposals: 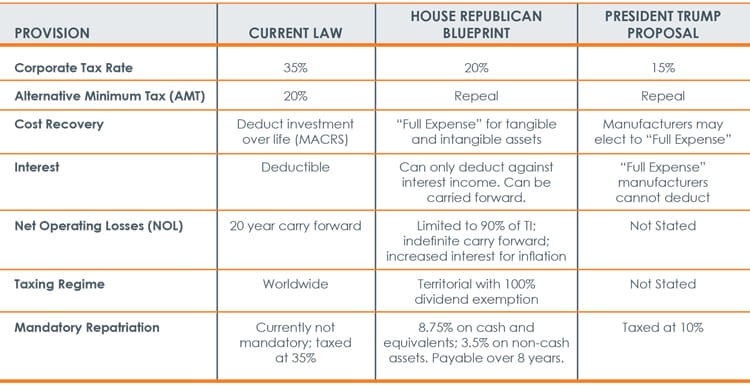